All The Right Moves

Just found out The Skeleton Boy will be screening in Winners' Screening of the Johnstown Film Festival on June 19th!

Johnstown is my hometown, so I'm excited and proud for Skeleton Boy to be a part of the Festival. My first short, Alice And The Devil premiered in the first Johnstown's Film Festival in 2006, and Smile screened to much praise in 2008. It's always a thrill to show my work to my hometown friends and family. Especially as it allows my buddy and long-time collaborator, Matt Miller, to get much deserved props for his amazing music. Matt has composed the scores of all three of the above. He's truly a wonder. Despite my inability to talk about music in any kind of sensible manner, Matt manages to come up with quirky, beautiful and fitting tracks for all of my work no matter the genre. Matt's a Johnstown resident and artist. You can find out more about him and his colleagues at My Idea of Fun, part of 709 Railroad.

The final night of the festival takes place in the James V. Saly Courtyard at the Heritage Discovery Center, which is a fantastic outdoor venue, where you watch movies under the stars! The first year I saw two shooting stars during the screenings, and a number of really interesting shorts. It's a really cool affair, so if you're anywhere near - please come out. Zach & I'd love to see you there. Hey, we'll even bring stickers! 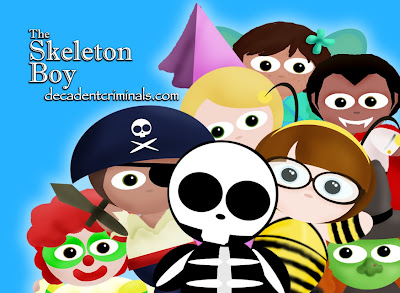 Posted by Kristy Puchko at 2:23 PM

Thanks Kristy. I'm not one of the judges but "Skeleton Boy" was one of my favorite, if not my very favorite, of this year's selections. Looking forward to seeing you!

Why thank you, Shelley. I'm a big fan of it myself! See you on the 19th.
~Kristy