One Day and Internet Fame 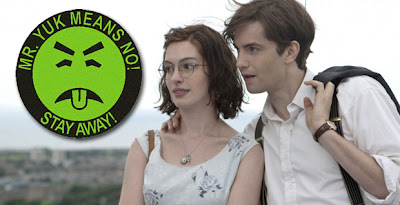 So it's been an absulutely crazy week.
Last Thursday I showed Jordan Raup Editor-In-Chief of The Film Stage a piece I'd written on Lone Scherfig's One Day. He was wholly supportive and after some brainstorming we came up with a fitting title:


Why 'One Day' is the Most Toxic Romance of the Year.
Not a review but a feminist evisceration of the film's offensively sexist themes, we posted immediately and the article quickly drew notice -- much to my surprise and delight.

On Friday, the feminist pop culture blog Jezebel asked for permission to republish the piece there. With Jordan and my approval, it was up by Friday night, which as a big Jez fan was very exciting. Through the weekend it was consistently their most popular post, with upwards of 250 people reading it at any given moment. Their message board and ours lit up with impassioned arguments and discussions ranging from sexism in film to the value of film criticism. By now over 52,000 people have viewed the piece, and I've lost track of all the twitter accounts, blogs and tumblr accounts that have reposted 'Why...' in parts or included links.

But here are some of the highlights I've found:

Overall, I'm in awe of the response to this article, which began as an enraged journal entry. The outpouring of passion, support, praise and defense that has come from friends, family, colleagues and total strangers has been overwhelming and deeply humbling. I'm glad to see that an issue that means so much to me has struck such a chord, and I want to thank all of you who have read my piece, commented on it, shared it or linked it. This has been an extraordinary experience.


And lastly, I'd like to thank my husband and partner in crime, Zach Symons, who encouraged me that this was an argument worth perusing with humor and vigor.


---
If you find anymore surprising/exciting links to my piece, please do share!

Posted by Kristy Puchko at 8:05 AM