Well summer is drawing to a close with fall fast-approaching. And I have some exciting news to share.

As I've previously mentioned, our friend Jenny Checcia has had her first book of poetry published. Along with being filled with striking and tender poems, this touching tome (titled The Bridge) is peppered with some awe-inspiring artwork - including some doodles by yours truly. 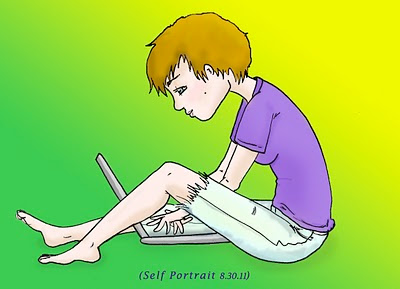 To promote the book's release, Jenny and I participated in a quirky Q&A that you can view here.

The Bridge is now available in paperback, and all proceeds will go to the starvation-fighting charity The Hunger Project. You can buy it now at JennyCheccia.com.

---
In other news, Critical Mob has also posted my contributor profile, and there you can find all of the reviews I've done for them thus far, including my latest - a positive review for Gus Van Sant's rough-around-the-edges romance, Restless.

---
And over at the Film Stage, I recently had the good fortune to interview Anne Sewitsky, the director of a Norwegian comedy that I absolutely adored called Happy Happy. (Read my review here.)

---
In the coming weeks -- aside from some editorial projects that are still hush-hush -- I'll be covering NYFF (the New York Film Festival), taking in films that have drawn notice at Sundance, Cannes, Toronto, and Venice.


Of course, you easily can keep up with all my reviews by following me on Twitter.
Posted by Kristy Puchko at 10:49 AM