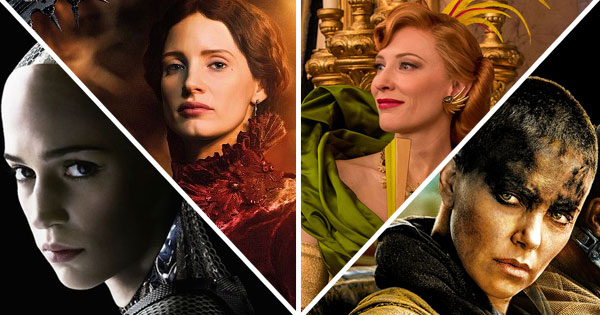 15. Man Up
I'm a sucker for a good romantic-comedy, and this British romp is a great one! Simon Pegg plays a pilfered blind date to Lake Bell's flustered single girl. It's spunky, silly, sweet and surprisingly sexy.

14. Creed
I've never been much for sports movies. (Pressed on the subject, I'll admit Cool Runnings and A Knight's Tale are my favorites.) But Ryan Coogler's Rocky spin-off spun a tale that was raw with emotion, thick with nostalgia, yet fun and fresh. By the time that familiar theme played, I was totally knocked out by Michael B. Jordan's powerhouse performance in this blistering boxing drama.
My review. Podcast ep.

13. Goodnight Mommy
It's a horror movie so sickening it had me gasping for breath. But what really stuck with me is the twisted ending that spun my head and left me reconsidering all that came before. Its is a dizzying terror that lingers.
My review. Podcast ep. Spoiler discussion.

12. Krampus
As a lover of Christmas movies, of creature features, and of horror based on the perils of rule-breaking, this twisted holiday tale felt like it was special ordered just for me.
My review. Podcast ep. Interview with director Michael Dougherty.

11. Cinderella
I was surprised by how Disney took this sexist old tale and re-invented it to be a spirited and fun fable about the courage of kindness and the valor of sacrifice. Bonus: no movie this year gave us more glorious fashion than this, from Cate Blanchett's Hollywood glamor to Cinderella's dreamy gown that floated like a cloud. Swoon!
My review. Podcast ep.

10. Brooklyn
A simple story rich with emotion, this tender and heartwarming coming-of-age drama shows the blossoming of a young woman thanks to a career-defining performance by cute child star turned enchanting ingenue Saoirse Ronan.
My review. Podcast ep.

9. Slow West
The directorial debut of John Maclean, this surreal Western blended eccentricities, romance, humor and grit to spin a tall tale that is moving, macabre and at times hilarious.
My review. Podcast ep. Interview with Ben Mendelsohn and Kodi Smit-McPhee.

7. Star Wars: The Force Awakens
As I've never been much of a fan of this franchise, I thought my list was set ahead of seeing Episode VII. But this awesome sequel blew me away with its exciting new stars (Daisy Ridley, John Boyega, Adam Driver and Oscar Isaac), captivating characters, rollicking adventure and progressive politics. No cries of Mary Sue can spoil this good movie high.

My review. Podcast ep. All manner of other Star Wars things.

8. What We Do In The Shadows
This mockumentary about a quartet of vampire flatmates is a side-splitting exploration about the ludicrous quest to be cool. It's so packed with visual gags and one-liners, rewatches are required. Cackling is promised.
My review. Podcast ep.

6. The Martian
A clever book thick with wit and jargon was masterfully transformed into a cinematic event lush with humor, tension and jaw-dropping spectacle, bolstered by a star-studded and extraordinary ensemble cast.
My review. Podcast ep.

5. Carol
Alive with color, fierce in fashion, and vibrant with emotion, this lesbian love story set in 1950s New York plays like a classic Hollywood romance that somehow escaped the censoring of the Hays Code. Remarkably, I didn't actually write about this anywhere. How did that happen...

4. Spotlight
I've been in awe of Tom McCarthy's ability to craft character since The Station Agent. With his top-notch ensemble and an eye toward maintaining the complicated truths of Catholic Church sex scandal uncovered by The Boston Globe, McCarthy made his greatest film yet, both heartbreaking and humane.
My review. Podcast ep.

3. Crimson Peak
Not the bone-rattling terror fest I expected from its trailers, Guillermo del Toro's gothic romance played like Jane Austen meets Wes Craven. And I loved it from its sly wit to its gory ghosts, decadent production design, and Jessica Chastain's brilliantly over the top diva.
My review. Podcast ep. Perfume review.

2. Ex Machina
In his directorial debut screenwriter Alex Garland built a sci-fi fairy tale that was not only thrilling, frightening and stunningly stylish, but also rich with gender politics. How could I resist?
My review. Podcast ep. Interview with Alicia Vikander and Oscar Isaac. Vanity Fair think piece.

Ready to review #pitchperfect2 on @popcornprosecco
A photo posted by Kristy Puchko (@kristypuchko) on May 14, 2015 at 2:10pm PDT

1.  Mad Max: Fury Road
Was there any doubt? This year's releases were full of grand spectacle, devastating drama, unapologetic tenderness, brilliant humor and awe-inspiring cinematography. But one film blended all of these with a bonkers brand of action and style that was so grand it left me literally speechless.
Vanity Fair think piece. Podcast ep. Link round-up. Long live Furiosa!

Posted by Kristy Puchko at 1:57 PM